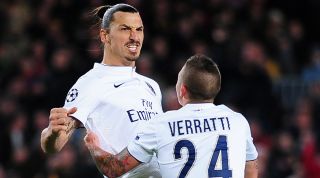 The Swedish striker's confidence is world renowned, and speaking exclusively in the February 2015 issue of FourFourTwo – out on Wednesday – Verratti underlined the extent of his PSG colleague's self-assured nature.

"We are starting to get used to the amazing goals he scores," Verratti tells FFT. "Some of the plays you see him do during a match – they don't just happen. He works on everything in training. He has a co-ordination and creativity that very few players have. Even Ibra has got us used to his amazing goals!"

Verratti, named one of FFT's '23 under 23' – a list of the best young players in world football – has played with Ibrahimovic since the pair both moved to Paris in the summer of 2012. Since then, PSG have become the dominant force in French football, winning back-to-back Ligue 1 titles – their first and second since 1994.

Yet, the 22-year-old Italian international has explained that, in the run-up to their 2013 success, the club from the French capital were lacking in faith – until Ibrahimovic's intervention.

"Before winning the 2012/13 league title, we were getting ready to play against Lyon," Verratti explains. "Carlo Ancelotti was a bit tense, so Ibra approached him and asked him if he believed in Jesus. Ancelotti said yes, so Ibra told him: 'Good, so you believe in me. You can relax!' Zlatan is like this – he has a lot of self-confidence. This helps him to be a great player."

Verratti also helped PSG to the French League Cup in 2014, and will now have Premier League leaders Chelsea in his sights as the two clubs prepare to do battle in the last 16 of the Champions League next month.

Read the full interview with Marco Verratti in the February 2015 issue of FourFourTwo, which hails the globe's finest 23 players under 23 and features exclusive chats with Ross Barkley, Mario Gotze, Koke, Antoine Griezmann, Marquinhos, Aymeric Laporte and Ryan Gauld. Plus, FFT goes One-on-One with Alan Shearer, meets the joint-managers with a difference at Whitstable Town and asks Adebayo Akinfenwa some silly questions. Available from Wednesday January 7.