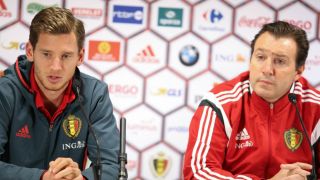 Jan Vertonghen says former Belgium coach Marc Wilmots has left a legacy he can be proud of after he was fired from his post as national team boss.

Wilmots oversaw a disappointing Euro 2016 campaign in France as Belgium bowed out in the quarter-finals against Wales.

Wales went on to lose the semi-final against Portugal 2-0 before the latter won the tournament by beating hosts France 1-0 after extra time in the final in Paris.

But while Vertonghen said he and his team-mates are still rueing their inability to cash in on a priceless opportunity to bring silverware back to Belgium, he said the outgoing coach had helped develop what many consider to be the country's best ever pool of senior talent.

"This team has a lot to thank Marc Wilmots. He has set up a good structure and given us confidence," Vertonghen said.

"He also managed to debut many players. Some have developed very well under him.

"I think the coach certainly could have stayed, but the pressure was so high towards the next World Cup. With each goal or every bad pass, they would sit ready to finish him off. That's not a good situation."

Vertonghen said the new coach, whoever the Royal Belgian Football Association appointed, would have to be strong-willed and technically sound.

"In any case I hope for a coach because he believes in the national team and our young guys, someone who really wants to achieve something and not someone who simply wants to develop his own career," he said.

"I still believe there is a lot to achieve with this team. That belief comes from all over the country and my team-mates, too. I hope the new coach believes too. Hopefully we can get something fantastic at the World Cup and make more of an impact than the quarter-finals."