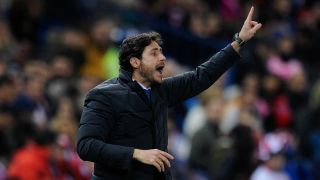 Victor Sanchez may have preserved Real Betis' LaLiga place for another season but after three consecutive defeats he has been sacked by the Seville-based club.

Sanchez only replaced Gus Poyet in November but Monday's 4-0 drubbing at struggling Leganes condemned Betis to their sixth league loss in eight matches.

Betis have turned to former captain Alexis Trujillo for the final two games of the season, with the club languishing in 15th position, 10 points clear of the relegation zone.

"Real Betis would like to thank Mr Sanchez del Amo for all his services to the club and wishes him all the best in the future," a statement read.

Trujillo will oversee matches against Atletico Madrid and Sporting Gijon to close out the season.

"The board have also decided that the final two games of the current season will be coached by Alexis Trujillo, the club's technical secretary and member of the previous coaching staff," Betis' statement continued.