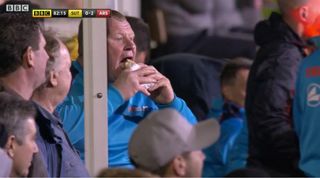 20-stone Sutton United goalkeeper Wayne Shaw was caught tucking into a pie in the 82nd minute of the National League side's FA Cup clash with Arsenal on Monday.

Before the game, which the Gunners won 2-0, The Sun were taking bets on 'The Roly-Poly Goalie' eating said food during the encounter, with odds of 8/1 offered. Any punters who took them up on that price would have had a huge grin on their face when they saw the 46-year-old gorging on the pastry in slow motion.

It had already been a busy day for Shaw, who was previously spotted vacuuming the away dugout before the match. Shaw was then seen in the bar at half-time, possibly sneaking in a cheeky pint as well.

I kid you not. Sutton reserve keeper Wayne Shaw is in the bar at half-time. pic.twitter.com/f7014pXRBP