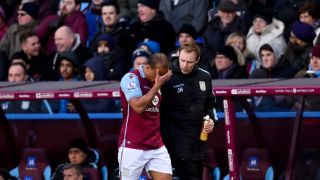 Aston Villa have suspended Gabriel Agbonlahor while they carry out an internal investigation into his conduct.

Pictures of the forward appearing to hold a shisha pipe while on holiday in Dubai during the recent international break surfaced in the media this week.

The club have confirmed he will play no part in Saturday's game against Premier League champions Chelsea while they look into the matter.

Team news: An internal investigation is currently underway. While this is being conducted, Gabby Agbonlahor will not feature. April 1, 2016

Villa are 12 points adrift of safety at the bottom of the Premier League and parted company with manager Remi Garde on Tuesday.

A club statement posted on Twitter read: "Gabby Agbonlahor will not be involved in Saturday’s early afternoon clash with @ChelseaFC.

"An internal investigation is currently underway. While this is being conducted, Gabby Agbonlahor will not feature."