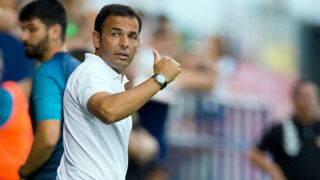 Villarreal have appointed Javi Calleja as their new head coach following the sacking of Fran Escriba.

Calleja had been the coach of Villarreal B, but he has now been promoted to the first team, who he will lead for a first training session on Monday.

The 39-year-old played for the Yellow Submarine as a midfielder for seven years, departing after the 2005-06 season in which the club reached the semi-finals of the Champions League.

Having lost 4-0 at Getafe in Escriba's final game in charge to drop to 14th in LaLiga, Villarreal's next match is a Europa League clash with Maccabi Tel Aviv in Israel on Thursday.

The club have confirmed they will soon announce a new Villarreal B coach.