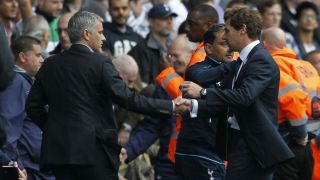 Andre Villas-Boas has revealed that his managerial career was born of a fallout with former mentor Jose Mourinho.

The 38-year-old worked under the current Manchester United boss at Porto, Chelsea and Inter, but opted to leave his job at the Serie A giants in order to pursue a position of head coach elsewhere, eventually taking charge of Academica.

Villas-Boas has now explained that his adoration for Mourinho waned when he got on his "wrong side", prompting him to explore other options.

"In my formative moments working with Jose [I had] the best time of my life," Villas-Boas told reporters at the aspire4sport congress.

"I was able to learn many things and working with him takes you to another level. You fall in love with him and he becomes your idol. I wanted to be like him, know everything that he knew and absorb all the information he was giving.

"Then you fall on the wrong side of Jose and that's when things change and you realise that you've been blinded by someone. He has this fascinating capability of getting the best out of you, which has good or bad consequences for people.

"My consequences were that as a result of the argument or disagreement we had, I started my coaching career."

Villas-Boas went on to take charge of Porto, Chelsea, Tottenham and Zenit Saint Petersburg, though he admitted the job at Stamford Bridge came too soon for him.

"The Chelsea experience was too much too soon," he added. "I wasn't flexible as a manager at that time. I was communicative, but I wasn't flexible in my approach. At Tottenham I learnt to be different.

"In professional football you have to live day-to-day. The objective is the group performance, but every single individual requires a different response from a manager – you can't be the same person to each player.

"At Chelsea, the group was more important, I stuck to my methods too much."