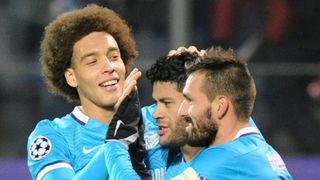 Andre Villas-Boas lavished praise on Hulk after his wondergoal helped Zenit to the verge of the Champions League knockout stages in a 3-1 win over Lyon.

But Hulk swung the match back in the Russian champions' favour with a stunning 30-yard effort to cap a fine performance, and Danny's late goal completed the job.

And head coach Villas-Boas paid tribute to Brazil international Hulk for his impact.

"Hulk had an amazing match. The fact that a player can make such decisions shows his class," he said.

"Once the opponent equalised, our confidence was down a bit, but Hulk's goal turned the game in our favour."

Zenit's win means they can qualify for the knockout stages by beating Lyon in the return fixture at the Stade de Gerland.

Villas-Boas added: "There is still another meeting with Lyon, everything can be solved not only for us but for the opponent."

The result could have been more comfortable with Dzyuba guilty of missing two great opportunities, but Villas-Boas was pleased with the striker's contribution.

"Dzyuba was disappointed that he failed to score a second goal," he said. "I am very pleased with the way he played."