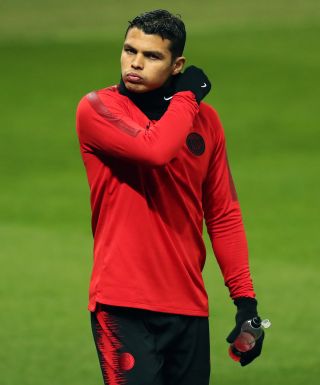 Thiago Silva has insisted his cult status beyond football means nothing without silverware.

The Brazil stalwart has fired a stark lesson to Chelsea’s talented youngsters that in football it is only the winners who are remembered.

The 36-year-old admitted he now knows all about Dave and AJ Tracey’s hit single Thiago Silva, after teenage fan Alex Mann joined the British rap stars on stage at Glastonbury.

The impromptu rendition went viral, reached Silva in Paris – and the 89-cap centre-back organised a meeting with the young fan.

But while Silva admitted his delight at the musical homage, he laid bare his desire to drive Chelsea back to the top of English football as he starts his Premier League career.

“I had never heard of the song before but after that festival, this video of the lad Alex coming out of the crowd wearing my shirt, he got on stage and sang the song with all the other artists and it went viral,” said Silva.

Thiago Silva has recognised Thiago Silva and now I have decided to retire. My work here is done— SANTAN (@Santandave1) July 1, 2019

“Of course, it arrived to me in Paris and I then got the opportunity to meet Alex and thank him because sometimes us footballers lose the idea of the influence and reach that we have.

“So I was really happy, it was pleasing that there’s a song with my name. I remember that day well. I think about all my experience in my career and everything I have won.

“I think it is important to show the young players that just playing matches isn’t enough, they need to be preparing to be ready and to be in the best state that is possible.

“They need to see how important it is to win things because it is people who are successful and winners who are remembered.

“The example is our manager, Frank Lampard, he has won the biggest and main championships in world football, so he will be remembered eternally. Not just be Chelsea fans but England fans too.”

Silva turned 36 on Tuesday, and can mark his birthday by making his Chelsea debut in Wednesday’s Carabao Cup clash with Barnsley at Stamford Bridge.

The evergreen defender insisted his advancing years will prove no impediment to success in west London, and vowed to cope with the English top-flight’s intensity.

When quizzed on whether he has concerns over the Premier League’s speed, Silva said: “No, I don’t worry at all because I know where I want to get to because I have really high hopes about this team, this young team.

“Thank god, I physically feel really good. Age is just a number on your document but physically I feel very young.

“I am very well prepared for this and I have been preparing for this my whole life.

“People who know me, know how much I put into my work. I put in 200 per cent and this is a great opportunity that Chelsea and Frank Lampard has given me and I don’t want to let them down.

“At 36, I am arriving to play in one of the best championships in the world.

“This is usually a league of young players but I am coming here as an older player and I see it as because Frank Lampard and Chelsea want a player of my experience.

“If someone wants a runner, then I refer to the words that Carlo Ancelotti used for James Rodriguez ‘if you want someone to run, they can sign Usain Bolt’.

“With my experience and the young players here, I hope to help them in this new adventure.

“It is another opportunity for me in my life. I will say that I am very well prepared, I have been working hard towards this.

“Tomorrow is my first game and I feel like it will go well given the way that we are training.”