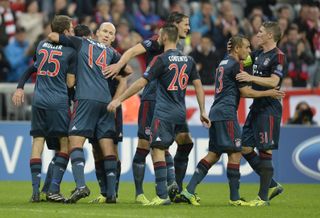 The reigning Bundesliga and UEFA Champions League winners maintained their perfect record in Group D with the convincing victory at Allianz Arena on Wednesday.

Vrba's side are bottom of the group without a point having scored twice and conceded 11 in three outings.

The coach said the difference between the Czech league champions and Bundesliga giants had been made clear.

"The giant difference between us and Bayern was clear during the game," Vrba said.

"We have players of a certain quality and they were contrasted with a team that is ruling football these days.

"Some of our players could have been involved more but that also depends on the opponents and they simply did not allow it."

Bayern were 2-0 ahead at half-time thanks to a Franck Ribery penalty and David Alaba strike before they struck three more times in the final half-hour.

Vrba refused to make excuses for his side and praised goalkeeper Matus Kozacik for his efforts despite conceding five goals.

"We played under tremendous pressure against a team that right now is probably the best in the world. I do not want to offer any excuses," he said.

"Unfortunately even our attempts on the counter-attack ended before their penalty area.

"Bayern were the significantly better side and if it was not for goalkeeper Matus Kozacik, the result would have been even crueller for us."