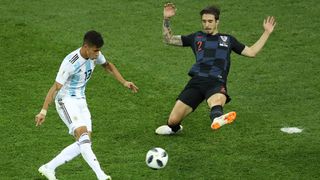 Put to him that Argentina coach Jorge Sampaoli had suggested his team dominated, Vrsaljko dismissed the claims and hit out at the South Americans.

"I don't know what game he watched," the full-back said, via Croatian media.

"I saw Argentinians falling on the floor and crying like girls.

"We were firmer, better, had better chances. They will have to do well in the next game [against Nigeria] to progress to the second round, if they even progress."

Argentina were left with one point in the group and needing other results to go their way to reach the last 16.

Iceland also have one point and face Nigeria in a crucial clash Friday.