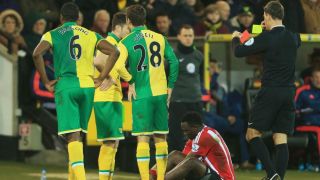 Southampton midfielder Victor Wanyama has apologised for the red card he picked up in Saturday's 1-0 away defeat to Norwich City in the Premier League.

The Kenya international was given a second yellow card for a needless challenge on Vadis Odjidja-Ofoe and Alex Tettey netted the winner for the home side just three minutes later.

Manager Ronald Koeman was angry with the player for his ill-discipline after the match and Wanyama has since taken to Instagram to admit he had been "irresponsible".

"I would just like to apologise to the manager, fans and everyone at the club for my red card yesterday," he wrote on Sunday.

"It was reckless and irresponsible and I should have used my experience to have not let it happen, especially when I was on a yellow card.

"I now just want to focus on getting back on the pitch and helping the team as much as I can."

The defeat was Southampton's fourth in their last five league games.