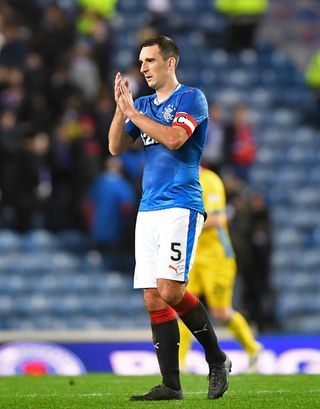 QPR boss Mark Warburton savoured Lee Wallace’s stunning goal in the 5-1 thrashing of Swansea as his team secured a place in the FA Cup fourth round.

Jordan Hugill – who netted twice – scored with a volley, as did Josh Scowen, as the home side turned on the style in a victory which also included another goal for the in-form Bright Osayi-Samuel.

It was the Scot’s first goal since arriving from Rangers last summer, having previously played under Warburton for the Ibrox club.

“And to see Lee Wallace hit a right-foot shot is like Halley’s Comet – make the most of that one because it might never happen again!

“Lee Wallace with the right foot. That’s like watching Lord Lucan riding Shergar, that one. Savour the moment.

“I’m delighted for him because he’s a high-quality player but he has had to be patient because Ryan Manning has kept him out of the team. Lee has shown his quality for us in the last couple of games.”

Warburton’s side are in brilliant goalscoring form, having thrashed Swansea’s rivals Cardiff 6-1 on New Year’s Day.

He said: “I thought we played very well against a very good footballing team.

“They all did very well and most importantly they responded to the Cardiff performance with a really solid display today.

“People like Bright and Ilias Chair, who were very good against Cardiff, maintained it. The consistency has to be at the right level.”

Swansea boss Steve Cooper said he was “fuming” and accused his players of a lack of effort after their crushing defeat at the hands of their Sky Bet Championship rivals.

“We’ve got no one to blame but ourselves,” said Cooper, who made 10 changes to his side.

“The basics of attacking and particularly defending were nowhere near the average, never mind beyond that.

“If you’re not willing to get up to people, to tackle and intercept, then you run the risk of conceding goals and that’s what happened.

“We have to take it on the chin. We’ll get some criticism for this, me included, and quite rightly. We have to accept that and put it right.”

It was an unhappy return to west London for former QPR defender Jake Bidwell, whose mistake led to the second goal.

Osayi-Samuel chased him across the edge of the penalty area and dispossessed him before slotting home.

“It’s a clear mistake and an awful goal that we’ll have to look back on and it won’t get any easier when we see it,” said Cooper.

“But I thought the five goals, from their point of view there was some good finishing, but for me every goal we could have done better defensively.

“There’s no rocket science to defending – if you’re not willing to get up to the ball and play with a bit of heart and soul then you can get run over like we did today.

“If you’re not going to do the basics right and not going to work hard enough then you won’t be winning any game of football.

“I’m disappointed and frustrated by the performance of my team. I’m fuming. I can accept getting beaten but I can’t accept not trying and not giving your all.”