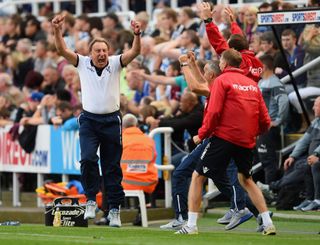 Warnock was appointed as Palace manager for the second time on Wednesday, replacing Tony Pulis.

It proved to be a dramatic return for the Yorkshireman too, as Zaha netted in the fifth minute of stoppage time in his first game since making a switch back to Palace himself, on loan from Manchester United.

Dwight Gayle had given Warnock a dream start with a goal inside the first minute, with Jason Puncheon restoring that advantage in the 48th minute after Daryl Janmaat's equaliser.

A header from substitute Rolando Aarons and a goal from Mike Williamson appeared to have turned the game decisively in Newcastle's favour late on but Zaha - who had already seen an earlier effort chalked out for offside after Aarons' leveller – ensured a share of the spoils.

"You can't really ask much more than what the players gave me today," said Warnock.

"We've had a good two days, that's all we've had together, two cracking sessions, they played today like I thought they could play.

"But I thought in the second half we were a lot more clinical in breaking out and we created some great chances.

"I still think that was a cracking goal [from Zaha, that was disallowed] that should have put the game to bed.

"It was cruel to end up 3-2 down when you think you should have won the game but all credit to them. To come back at that stage I thought was a fantastic achievement."