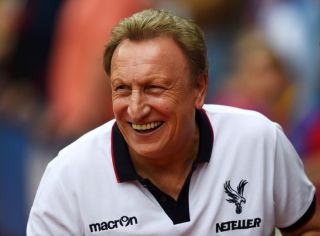 Warnock has not tasted defeat in the Premier League since returning to Selhurst Park for a second spell as manager in late August.

The 65-year-old is likely to name the same starting XI that secured league victories over Everton and Leicester City in Palace's last two top-flight outings for Saturday's trip to Hull City.

That means the likes of close-season signing Brede Hangeland, midfielder Barry Bannan and centre-back Paddy McCarthy - who recently signed a one-year contract extension at Selhurst Park - will continue to take a watching brief as Warnock has no intention of changing a winning formula.

"Everybody wants to play football, it's the job of the manager at this level to keep everyone happy," he said. "When you lose games they bang on your door.

"You pick a side and if they do well you keep them. He's [Hangeland] a very good pro, he was the first to congratulate me at the weekend on the result, he trains very hard.

"It's the same with Bannan. They're just as important as the first-team, we need everyone. It's the same conversation, they all want to play but you don't change a winning formula."

With Palace enjoying a fruitful run in the Premier League, Warnock allowed promising midfielder Jonathan Williams to return to Ipswich Town on loan after a successful temporary period at Portman Road last term.

Williams started his second tenure by coming off the bench to score the equaliser in Tuesday's 1-1 draw at Sheffield Wednesday and Warnock believes the 20-year-old still has a bright future at Palace.

"He [Williams] can change a game," he added. "Jonny knows what I think about him but I'd rather he be playing for Ipswich than sat in the stands.

"I spoke to him after [the Wednesday game] and told him great goal. We have people looking at him. I think he'll be a very important player for Palace in the long term."