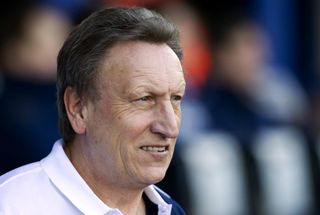 Warnock's return for a second stint as Palace manager came as somewhat of a surprise, the 65-year-old agreeing a two-year deal on Wednesday following Tony Pulis' exit on the eve of the Premier League season.

Pulis' departure was rumoured to have been a result of a disagreement with the club's board over transfer targets.

However, Parish has rejected that notion and full responsibility will lie with Warnock when it comes to player recruitment.

"The manager decides which players come to the football club," Parish told talkSPORT. "That was always the case and that will be the case with Neil.

"Neil has got some people in mind who he wants to bring in. He might have done one already, which will be pretty exciting for everyone. He's already working on two or three more.

"He's actually changed a few that we were working on and he's got some ideas of his own.

"He's the manager, he picks the team and brings the players in, we are just here to facilitate that. It's very good to have the right man in place to do that."

Warnock first managed Palace between 2007 and 2010, but departed for QPR with the club embroiled in financial difficulty.

And Parish believes the ex-Sheffield United and Leeds United boss will relish the challenge of leading Palace in the Premier League.

"Neil Warnock left last time, when we were in administration, to help the club really," he added.

"It was a great offer from QPR and the administrator needed him off the wage bill. They then got compensation from QPR as well.

"There is a lot of unfinished business for Neil at Crystal Palace. He says that Palace rejuvenated his interest in football when he was here first time around.

"There are a lot of fond memories for Neil at Palace. He wants to keep the club in the Premier League. He's got this tag, somewhat unfairly, as a Championship manager."