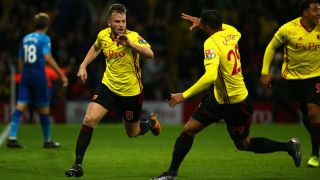 Comeback kings Watford handed Arsenal a first defeat in eight matches as Marco Silva's men recovered from a one-goal deficit to snatch a dramatic 2-1 triumph at Vicarage Road on Saturday.

Per Mertesacker marked his first Premier League start in 532 days with the opening goal, the German defender converting Grant Xhaka's corner in the 39th minute, to put Arsene Wenger's side on course for a fifth successive win in all competitions.

However, Watford - who had scored late goals to pick up points against Swansea City and West Brom in their last two outings - once again demonstrated their new-found resiliency under manager Silva.

A 71st-minute equaliser from the penalty spot by substitute Troy Deeney got the hosts on level terms and set up a thrilling finish.

After Etienne Capoue hit the post, the game appeared set to finish all-square until Tom Cleverley popped up with an injury-time winner to complete the recovery mission and send Watford above Arsenal and up to fourth.

The midfielder - who had been easily beaten in the air for Mertesacker's header - was in the right place in the penalty area to convert a loose ball, meaning the Gunners are still yet to record an away league win this season.

The dramatic finish spectacularly bursts the fragile bubble of optimism that had been growing at Arsenal, who had put together an impressive run of form since a 4-0 hammering at Liverpool on August 27.

Wenger will rue his side's failure to hold onto a lead given to them by the most unlikely of goalscorers, club captain Mertesacker - replacing the injured Shkodran Mustafi in the starting XI - celebrating a rare outing by breaking the deadlock with a thumping header.

Up against the under-sized Cleverley, the towering German didn't even have to get off the ground to convert Xhaka's teasing set-piece delivery from the right and grab Arsenal's first away goal of the campaign.

The set-piece effort came after Arsenal had struggled to break down a Watford side that mirrored their opponents in starting with a three-man back line, too often settling for long-range attempts or throwing in hopeful crosses.

Silva switched to 4-4-2 on the hour mark and the move paid off when club captain Deeney - without a goal in his previous 13 league games - matched his Arsenal counterpart by converting from the spot after Hector Bellerin was adjudged to have pulled down Richarlison.

12 - Petr Cech has failed to save any of the 12 penalties he has faced with Arsenal in all competitions. Rooted. October 14, 2017

The equaliser came after Arsenal had twice fluffed their lines at the other end.

Alex Iwobi and Mesut Ozil, on as a replacement for the injured Danny Welbeck,were both guilty of putting their attempts too close to goalkeeper Heurelho Gomes, letting Watford off the hook.

The closing minutes saw Arsenal come under siege, with the post helping them out when Capoue's drive struck Mertesacker's chest to wrong-foot Petr Cech.

However, the woodwork failed to come to their rescue when Cleverley arrived at the perfect time to slam home a dramatic winner three minutes into added time.

- Watford have 15 points already this season, their best tally after eight top-flight games since 1982-83, when they managed 16 points under Graham Taylor.
- Per Mertesacker scored his first Premier League goal in 1400 days, since netting v Manchester City in December 2013.
- Cleverley's goal was his first in a league game for Watford since March 2010, when he netted against Sheffield Wednesday in the second-tier.