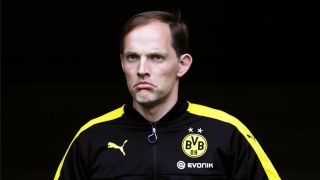 Hans-Joachim Watzke says Borussia Dortmund's decision to get rid of Thomas Tuchel was because they had become "worn out" dealing with the 43-year-old.

Tuchel's two-year tenure at Signal Iduna Park came to an end on Tuesday despite leading Dortmund to the DFB-Pokal for the first time in five seasons, ending a run of three successive final defeats.

Under Tuchel's leadership Dortmund could only finish third in the Bundesliga, though, and only managed to secure that position on the final day of the 2016-17 campaign.

Tuchel's relationship with CEO Watzke had become strained in the final two months of the season after they clashed over the rescheduling of their Champions League clash with Monaco following an attack on their team bus.

Watzke said dealing with the coach - and his staff - became too much for himself and sporting director Michael Zorc, leading them to seek a new manager to take the club forward.

In an open letter published on Dortmund's website he wrote: "We have witnessed a season which is hard to describe. A season that was very, very moving. Although it ended with a great success in Berlin on Saturday, there's need for explanations.

"This squad has achieved something historic. And we have to thank our coach Thomas Tuchel and his staff, that's clear.

"There's some criticism from fans that we have parted ways with Tuchel. We can understand that as a club. BVB was successful with Tuchel for two years in which we have reached our goals.

"But we, sporting director Michael Zorc and me, have worn ourselves out in dealing with the coaching staff.

"Taking your responsibilities is not only about the results, that's not different at Dortmund from any other sporting club. It's about basic values such as trust, respect, communication, authenticity, identification. It's about loyalty.

"In the current situation, we did not see any starting point for a successful work for the future. That's why we decided not to continue with this coaching staff beyond the season 2016-17.

"For me, it's important to let you know, that it wasn't a question of whether you could drink a beer together or play cards together or not. If we simplify these things, we would be bad decision-makers. In my opinion, club representatives and the coach don't need to be close friends.

"The special relationship, that we, Zorc and I, had with Jurgen Klopp wasn't the standard for the relationship with Thomas Tuchel - and it won't be for any future Dortmund coach."