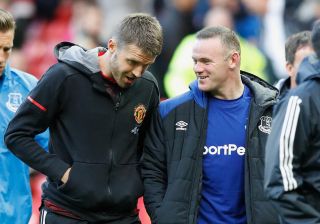 Wayne Rooney believes Ole Gunnar Solskjaer’s coaching team need to strike fear into those Manchester United players that have shown they are happy to hide.

United won just two of their 10 matches following Solskjaer’s permanent appointment in March and the drop in performances have been as alarming as the results, with the 2-0 home loss to Cardiff a fitting end to the season.

There are set to be numerous personnel changes at Old Trafford this summer but the club’s all-time top scorer believes the issues run deeper than that.

A veteran of the Sir Alex Ferguson era, Rooney believes Solskjaer needs to strike the balance between fear and respect to get the best out of the group.

“It’s a tough one because to watch Manchester United struggle is always tough,” the DC United forward said.

“But then all of a sudden, I don’t know whether it’s players being linked to other teams or players down tooling… I don’t think it is that but for some reason they just didn’t perform the last seven, eight games of the season, which has cost them.”

Asked how United change it, Rooney said: “I think the players need to fear someone.

Rooney knows more than most what it takes to flourish at United, having scored 253 goals across 559 appearances during a medal-laden stay between 2004 and 2017.

A team-mate of manager Solskjaer and first-team coach Carrick during that time, he was also in the dressing room with a number of the current crop and believes there is not enough accountability on the field or away from it.

“The way the game has gone has changed; the society has changed,” he said on the Wayne Rooney Podcast.

“You’ve got social media. You’ve got players losing a game and then posting something on social media about their new clothing range or aftershave, whatever, they are bringing out, which I find remarkable.

ANNOUNCING THE @WayneRooney PODCAST, a monthly conversation between the English legend and Rog about football, memories from his iconic career, and life in America on and off the field. LISTEN, SUBSCRIBE, RATE, REVIEW: https://t.co/wBGWZrkZabpic.twitter.com/6Q8Frir0ud— Men in Blazers (@MenInBlazers) May 16, 2019

“I have people who do similar stuff for me and they would never do anything without my instructions.

“If that’s what you’re doing, you’re sitting at the top of that business, you have to take responsibility for that.

“These players almost like to find someone to hide behind, whether that’s on the social media or on the pitch and that’s what they’re doing.”