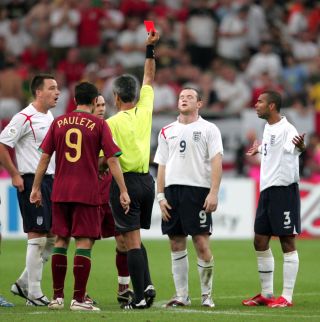 Wayne Rooney has admitted he should not have gone to the 2006 World Cup.

But, after getting fit in time, he then tore a groin in training and, rather than concede defeat, battled on.

Writing in the Sunday Times, he said of his recovery from the foot injury: “The next day was my first training session with the team. I don’t think anyone knows this, but we were jogging round the training pitch for the warm-up and there was a ball. I couldn’t resist.

“I hit it from the halfway line, trying to strike the crossbar and felt my groin tear. I knew straight away. I was: ‘Oh, f****** hell.’

“I got one of the physios to work quietly on it every day. I was taking painkillers. I didn’t want to say anything because a lot of people had put a lot of work into getting me fit. I didn’t report the injury until the tournament was over – and there was a 6cm tear in my groin.”

He added: “Looking back, I should never have gone to that World Cup. In the same position again, I’d rule myself out – and that’s why if the Euros were going ahead this summer I’d have said to Harry Kane and Marcus Rashford that if they were struggling in any way, not to push it.

“Of course it’s hindsight. Back then I was 20, it was my first World Cup and there was so much expectation on me.”