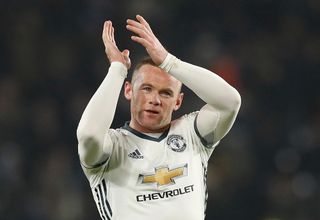 Wayne Rooney is set to face his old club Manchester United in the fifth round of the FA Cup after his current side, Derby, beat Northampton in a replay on Tuesday.

A then 18-year-old Rooney made a stunning debut for United following his £27million move from Everton, netting a hat-trick against Fenerbahce. A broken metatarsal delayed Rooney’s bow but it was worth the wait as the confident teenager lashed one into the roof of the net, dummied past a defender to strike from distance and then curled in a free-kick.

Derby day is always memorable, but which moments have got you talking most down the years? Tell us via #UnitedToday. pic.twitter.com/ZKcwRxihfV— Manchester United (@ManUtd) April 7, 2015

With 11, Rooney has scored more goals in Manchester derbies than any other player, the most memorable being the overhead kick that stunned City at Old Trafford in February 2011. It came as a Nani cross took a deflection off Pablo Zabaleta and looped higher. With perfect timing, Rooney, with his back to goal, flicked himself into the air and met the ball with a fierce strike that flew into the top corner.

Having already taken Sir Bobby Charlton’s England goalscoring record, Rooney surpassed the World Cup winner’s United tally in January 2017. Rooney came off the bench and curled home a superb injury-time free-kick to secure a draw at Stoke. It was his 250th United goal.

Rooney scored a stunning 15-minute hat-trick to inspire a remarkable United fightback at West Ham in April 2011. United were trailing 2-0 with 25 minutes remaining when Rooney curled in a free-kick. He levelled with a powerful strike and then put United ahead with a penalty before Javier Hernandez wrapped up a 4-2 win. Rooney was so emotionally charged he swore into a TV camera amid his celebrations and was later banned for two games.

Rooney put United in sight of the 2007 Champions League final as he scored two late goals to secure a 3-2 win in the first leg of their semi-final against AC Milan. United were trailing 2-1 at Old Trafford before Rooney levelled on the hour and then struck from 20 yards to win it in added time. It was a magic moment but, ultimately, not enough as Milan won the second leg 3-0.