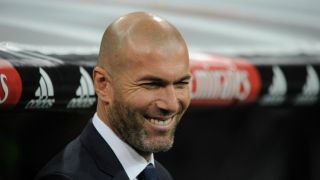 Zinedine Zidane had nothing but praise for Cristiano Ronaldo after the Portugal star's hat-trick guided Real Madrid to a 6-0 win over Espanyol at the Santiago Bernabeu on Sunday.

The 30-year-old has received his fair share of criticism this campaign following a number of underwhelming performances, with some questioning his status as Madrid's main man.

But Sunday's treble took his tally in La Liga this campaign to 19, level with Barcelona ace Luis Suarez at the top of the scoring charts, and Zidane was delighted with Ronaldo's contribution.

"We have got used to it that Cristiano scores a lot of goals. If he doesn't score three, he has not done well in the eyes of some," Zidane said at a news conference.

"It will always be like this, because we have gotten used to his goals. There is no problem if he doesn't score every now and then. He is hugely ambitious.

"Plus he put in a lot of work defensively as well today."

Karim Benzema opened the scoring for Madrid early on and Zidane was equally impressed with his compatriot's outing.

"It is hard to see anything where he can still improve. But he enjoys working hard and will certainly get even better," he added.

"It does not matter to me whether he scores the first or the second goal. He is capable of scoring and making goals. Plus he also does his work without the ball."

James Rodriguez, who again replaced the injured Gareth Bale, also found the net and Zidane was pleased with the Colombia international's performance.

"James put in a good performance and worked hard for the team," the Madrid coach stressed.