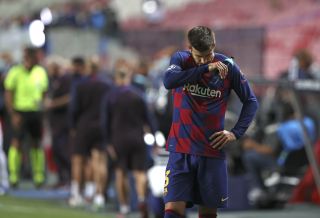 Gerard Pique has called for widespread changes at Barcelona after their “embarrassing” 8-2 Champions League thrashing by Bayern Munich.

Barcelona loanee Philippe Coutinho twisted the knife with a late double against his parent club, on a distressing night for the Catalan giants.

“It was a horrible game, the feeling is terrible, embarrassing is the word,” Pique said on the club website.

“I think now we have hit rock bottom.

“We can’t compete like that, you can’t play like that in Europe. It is not the first time, the second time or the third time, it’s very tough.

“I hope it is useful for something.

“Now everyone has to have a good look at themselves, the club needs change and I am not talking about the coach or the players, I am not pointing the finger at anyone.

“We have to have a real look internally about what is best for the club.”

Bayern overwhelmed a broken-looking Barca, but Setien’s side collapsed in a manner perhaps never seen.

Thomas Muller bagged a brace, with Ivan Perisic, Serge Gnabry, Joshua Kimmich and Robert Lewandowski all on target too, before Coutinho got in on the act with his damaging double.

Long-serving defender Pique has won 20 major titles in 12 years at the club, and used all that clout to point fingers at the Barcelona board with his forthright comments.

President Josep Maria Bartomeu insisted changes have already been planned for next season, and will be confirmed next week.

As well as a likely new manager, Barcelona’s 2021 presidential elections could even be brought forward.

“It has been a very, very tough night. I am sorry for the Barca fans and members, for the players, for everyone,” said Bartomeu.

“We were not the club that we represent, I am so sorry.

“There are some decisions that we had already made, and others that we will make over the next days.

“Announcements will be made from next week, we need to make decisions after things have calmed down.

“It was a devastating result. I congratulate Bayern, they played a great game and deserved to go to the semi-finals.

“We were not up to the occasion and we can only apologise to the members and fans.”