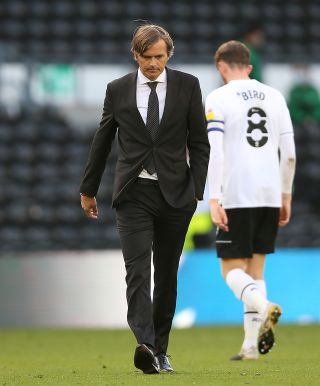 Derby manager Phillip Cocu admitted his team only had themselves to blame after they were beaten 2-0 at home by Reading.

Cocu’s side were second best and Reading, under new manager Veljko Paunovic, would have won by a bigger margin with better finishing.

The visitors were strong and purposeful from the first whistle and should have gone ahead in the 19th minute when Lucas Joao forced David Marshall into a good save before John Swift put the rebound over.

But it did not prove costly as the deservedly took the lead in the 40th minute when Joao steered in Michael Olise’s near-post corner.

It got even worse for Derby at the end of the first time when Joao held the ball up well before a clever backheel released Ovie Ejaria, who fired across Marshall and inside the far post.

Not even the introduction of Wayne Rooney could change the course of the game and Cocu said: “The result is very disappointing.

“Everyone is very excited to start again and then you lose the first home game, so it’s a big disappointment for everybody.

“But credit to Reading, the way they played was different to last season. A lot of rotation, good combination game, they really played some very good football and were hard to break down.

“But we really have to look at ourselves. I think the first 35 minutes is something we can’t accept, so it’s no surprise at half-time when you are 2-0 down.

“So I was very upset at half-time because, if you don’t present yourselves as a team like we can, then we have ourselves to blame.”

Reading came close to extending their lead after the brea,k with Marshall denying John Swift and Joao rattling the crossbar.

Paunovic said: “More than anything, I’m very grateful for the effort and performance of the players. I think we had a fantastic spirit, we respected the plan and were consistent and played good football, especially in the first half.

“We had a tough opponent in front of us which we respected and we played against them like warriors and that’s the spirit you want to instil from the beginning.

“I would say it is just common sense what we are trying to do and then we really work every day. A lot of coaching and teaching were involved in these couple of weeks, we were pretty intense with that.

“But that’s the only way, we believe we don’t have time to lose and we had to work very efficiently. I’ll say this, we saw mostly everything we’ve been working on in the last couple of weeks, but we have to polish a lot of things in the coming weeks.

“We also know it’s already starting to get very busy and the next couple of months will be very saturated and demanding ,so we have to take advantage of every opportunity to coach.”