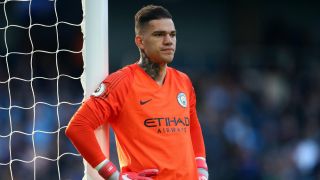 Ederson was briefly involved in City's midfield against Wolves as the Premier League champions moved within four points of leaders Liverpool.

The Brazil international rushed out of his box to win the ball before exchanging passes with City team-mate Ilkay Gundogan just inside the halfway line at the Etihad Stadium.

Guardiola, however, was not concerned post-match, telling reporters:  "I'm so pleased because he stays high [Ederson], the keeper has to defend our back four, in front with the long balls he's perfect.

"Adama [Traore] is maybe the fastest player I've ever seen in my life. It was good, he makes a decision, maybe he must be more precise, but the ball is out, no problem. But if you handle the risk, it's not easy.

"When he helps to do that, we play better, our build up is better, our midfielders get the ball in better conditions. Ederson, we love him the way he is, that's why it's not a problem."