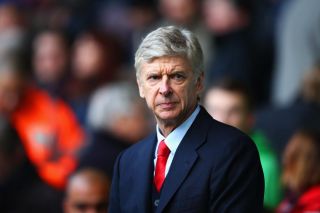 After a run of three matches without a win in all competitions, Arsenal finished November strongly.

A 2-0 victory over Borussia Dortmund secured their progression to the UEFA Champions League knockout stages, while a 1-0 win at West Brom on Saturday launched the club back into the hunt for a top-four berth.

Wenger's position as manager has faced increased scrutiny during a topsy-turvy campaign and a banner was unfurled at the final whistle of Saturday's contest at The Hawthorns that read: "Arsene, thanks for the memories but it's time to say goodbye".

However, the Frenchman remains convinced that the whole club is pulling in the same direction and is confident that success will be achieved at the Emirates Stadium.

"The most important thing is that we are internally very united," he said ahead of Wednesday's Premier League encounter with Southampton.

"Our job is to be competitive and to fight, and that's the way we can do our job by being united, it's what we are.

"We are creating something special inside the club, and that has to come out through performances and games won.

"Our job is to win football games and that's what we want to do. And that's the best way to unite everybody."

Arsenal welcome Southampton to the Emirates with Ronald Koeman's men seeking an immediate response to a disappointing showing in Sunday's 3-0 loss to Manchester City.

That defeat saw them leapfrogged by champions City in the Premier League table, but Wenger believes Southampton remain top-four candidates.

"If you look at the number of points and the number of games they've played you have to consider them if they can maintain the run," he added. "But we will know more about it in March."