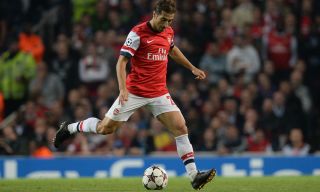 The Frenchman was withdrawn after 37 minutes of Saturday's 4-1 home victory following a clash of heads with Alexander Tettey, and Wenger admitted that he could miss the UEFA Champions League clash against Borussia Dortmund on Tuesday.

"He had concussion," Wenger said. "He had double vision, so on the advice of the doctor I took him off because I did not want to take any gamble.

"I don't know if he'll be available for Dortmund, it depends now what the doctors will decide.

"Sometimes they are not allowed to play for five days, it depends how big the concussion was."

His absence would represent a significant setback for Arsenal, with the midfielder having impressed since returning to the club from Milan.

Flamini's form has been one of many bright spots in what has been an excellent start to the campaign for the London club, who are two points clear at the top of the Premier League and unbeaten since the opening day.