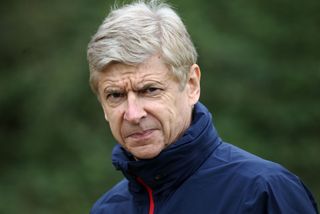 Wenger's men currently top the Premier League and maintained their perfect start in the UEFA Champions League with a 2-0 win over Napoli on Tuesday.

Arsenal's fortunes have improved dramatically since a 3-1 defeat at the hands of Aston Villa on the opening day of the campaign as the side have won every game since in all competitions and bolstered their squad with the signing of Mesut Ozil, who opened his account for the club against Napoli.

That has prompted fans and pundits to predict that Arsenal have a genuine chance of competing for honours this term – the club's last trophy was an FA Cup success in 2005 – but Wenger is adopting a short-term approach to matters on the pitch.

Ozil stole the limelight against Napoli, scoring one and setting up the other goal to earn lavish praise from Wenger.

The Frenchman said of the deadline-day signing from Real Madrid: "We are just lucky to have got him.

"I believe as well that he enjoys playing football and you could see that (against Napoli).

"He enjoys to play with his partners, he has integrated very quickly into the team, with the mentality.

"He came as well in a period where we are doing well and that maybe made it easier."

Wenger opted to start with Jack Wilshere on the bench against Napoli in order to give the England midfielder some respite after his much-publicised injury problems.

He added: "He comes back for a long time, he has given a lot on Saturday (a 2-1 win at Swansea City), and I decided that (to leave him out) very late.

"With him I am a little bit more cautious than I was before."