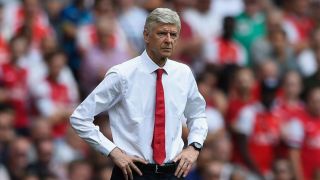 Arsenal manager Arsene Wenger has confidence in his squad's Premier League title capabilities despite their noted difficulties in the recent transfer window.

Wenger's only close-season signing was goalkeeper Petr Cech, as reported targets such as Edinson Cavani and Karim Benzema remained with Paris Saint-Germain and Real Madrid respectively.

An injury blow for Danny Welbeck intensified suggestions that Wenger should have brought in a striker, although the Arsenal boss says his side are capable of scoring enough goals this season.

Pointing to a dearth of options in the market, Wenger told reporters: "In the end the solutions were not what we wanted. We looked but you have to find an efficient solution.

"Look at what happened on the transfer market and it tells you there is a shortage out there. The solutions we had were not convincing at all.

"I am confident that we have enough quality and cover. I’m confident we can score goals, I have no worries about that.

"We have [Alexis] Sanchez, [Olivier] Giroud and [Theo] Walcott. We have quality and can score goals.

"The good news about the window shutting is that we can now focus on the football.

"The players we have know what they need to do. They have ability, they have ambition and we need to stand behind them."

Welbeck was already injured prior to the transfer window shutting but, having failed to shake off a knee injury, underwent surgery last week and was ruled out for a number of months.

Jack Wilshere has also not played this season due to an ankle problem, with Wenger revealing the England man has suffered a setback.

"I expected Jack to be back and available [for the weekend] and it's slower than expected," he added.

"He had a little setback, I don't know quite what [but] nobody has come back injured from international duty.

"Laurent Koscielny is fit and trained yesterday. [Per] Mertesacker is back in full training."