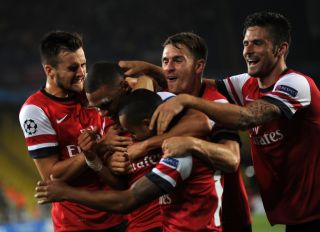 Goals from Kieran Gibbs, Aaron Ramsey and an Olivier Giroud penalty saw Arsenal claim a 3-0 victory in the first leg of their UEFA Champions League play-off in Turkey.

Wenger hailed his team for the way they dealt with a hostile atmosphere at the Sukru Saracoglu Stadyumu.

"This team has shown a lot of mental strengths. I told you yesterday and you forget that this team has only lost one game since March and under very special circumstances," Wenger told reporters.

"With the environment we faced it was difficult but there is only one way to do it, go out there and play football like we want to play."

Defender Laurent Koscielny was rushed to hospital with a serious head injury after being kicked in the face by Fenerbahce striker Pierre Webo.

Arsenal overcame that setback with three second-half goals, including Giroud's 77th-minute penalty, which ensured they are in a commanding position heading into the second leg.

Despite having to wait 51 minutes for the opening goal, Wenger believes his team were always in control of the contest.

"I believe we played in a very heated atmosphere against a good team but we had a proactive attitude from the first minute on and that certainly was very important tonight," Wenger said.

"We didn't come in shaky, we came in resolute and determined with the desire to take the game to them and overall we were in control."