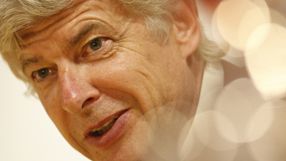 Should Chelsea triumph over Bayern Munich at the Allianz Arena next month, one of the Champions League qualification places through the Premier League will automatically be given to them – meaning that fourth place would miss out on the lucrative competition.

The Gunners would gain an automatic place in next season's competition if they maintain their current position of third.

They currently sit three points ahead of their closest contenders, Newcastle United. However, the Tyneside club have a game in hand on Wenger's men, where they will be looking to heap the pressure on the Emirates Stadium outfit.

Wenger told Arsenal's official website: "Look, if we finish third you want Chelsea to win the Champions League because it's great for the Premier League.

"If you are in fourth it would be masochistic to wish that you were out of the Champions League. You cannot ask the impossible."

Despite the task ahead of his side, Wenger is in confident mood going into the final few games of the season, adding:

"What we want is to finish third and not be in that tense situation - we are in the driving seat. If we win our games it is no problem for us. Let's make sure that we wish that Chelsea win!"