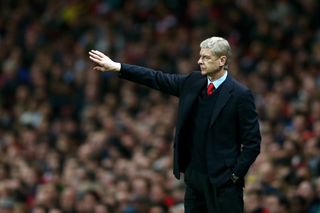 The Frenchman was speaking in front of fans and shareholders at the club's AGM on Thursday and optimistically suggested that they would have a "very good meeting" in May.

Wenger admitted to shortfalls in team performance last season, before declaring his joy at the side's start this time around.

"Last season, we had a difficult start, but from the end of November to the beginning of May we redressed the results," he said.

"The biggest disappointment - and for the first time in 17 years - was we lost in the cup competitions to lower division teams."

But Wenger is proud of the way his players have overcome a difficult opening day, when they lost 3-1 at home to Aston Villa, to lead the pack after seven games.

"The Premier League is tight again this season," he continued. "We need your [the fans'] support.

"We've had moments at the Emirates where we've not had that. But it's our job to also inspire you.

"We have huge ambition to win the league this season.

"At the end of May I'm confident we can have a very good meeting."

Wenger also spoke of his future transfer plans, with the club having come in for criticism after years of perceived under-spending on players.

"We were restricted financially and had to be strict, but we have come out of that," he explained.

"However, we have to defend our style of play and values, that comes from developing our own players, with youth policy and that should be core of our club.

"We will also look to buy proven quality - we did not need to scout to buy [Mesut] Ozil, it was just money.

"I am pleased we have shown you we are not afraid to spend."

Other issues covered at the meeting included the Gunners' controversial ticket prices, with new measures including £10 tickets for teenagers being announced.

Arsenal are unbeaten in the Premier League since the loss to Villa.