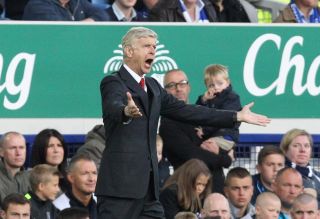 Back in April, Arsenal were soundly beaten 3-0 on Merseyside in a result that looked at the time to have severely damaged their UEFA Champions League hopes - although a late-season rally ultimately helped them to pip Everton to the fourth and final qualification place.

On the back of their European exertions at Besiktas in midweek, the north London side looked set for a repeat as Everton raced into a 2-0 half-time lead thanks to goals from Seamus Coleman and Steven Naismith.

But Wenger's men belatedly worked their way back into the game, as Aaron Ramsey continued his rich vein of scoring form to reduce the arrears in the 83rd minute and then Olivier Giroud headed them level in the final minute.

"When we got beaten 3-0 here it could have been many more," Wenger said.

"That was quite a flattering score on the day but today I believe we deserved the point we earned and for us to come back from 2-0 down against a team who is good on the counter-attack shows that the belief and resilience is there.

"Having said that, the second goal was offside and there was a foul before, just before half-time, so it was difficult to swallow. But we took it on the chin and came back in the way we did."

Giroud was introduced at the interval after Alexis Sanchez failed to fire on his first appearance in a central striking role for Arsenal and Wenger felt the France international's more imposing physical presence changed the complexion of the match.

"I have more strikers than before so sometimes I can give them a little rest," he said in explaining the decision to start Giroud on the bench - a player Wenger may be without for the second leg against Besiktas after he sustained an ankle problem in stoppage time.

"Giroud has just played one game since the World Cup so I gave him a little breather today but I knew we were dominating the game in the second half and we needed some physical presence up front, and he did that very well.

"We looked much more dangerous because we were not in a counter-attacking situation. We were in a dominating situation where of course you play 10 against 10 in one half and his presence is very important."