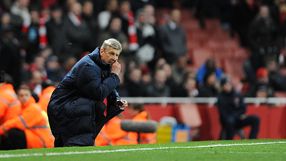 Wenger has long bemoaned the lack of technology in football and has again called for the availability of video replays for referees.

The criticism follows a number of dubious decisions, including referee Martin Atkinson's failure to spot a knee-high challenge by Mario Balotelli on Alex Song and decision to award Chelsea their second goal in the FA Cup semi-final against Tottenham Hotspur when replays suggested the goal should not have stood.

As officials come under ever-increasing pressure and scrutiny, Wenger believes that football authorities have been too slow to react.

"I would like to assess the situation as a whole at the end of the season," Wenger told the club’s official website.

"Last weekend was a very bad weekend, but we need to assess the global situation.

"I think the football authorities need to sit together and see how we can improve it. It is time for us to help the referees and not be so conservative and finally opt for video."

Wenger counters claims that video technology would stem the flow of the game or undermine the authority of referees.

He says the technology would improve the game on both those fronts, offering referees more protection and improving the flow.

"Video will help the referees, not question their authority. It will give them more credit, more authority and [produce] fewer mistakes," he said.

"We need instant video replays on the demand of the referee. It would not stop the game. It would sometimes give an even bigger flow to the game.

"Why? Because if I am a linesman and the offside situation is a 50/50, I am tempted to stop the game. If I know I have video behind me I am likely to let it go. You could improve the flow of the game and then check after."

He added: "I believe that football is the [number one] sport in the whole world but we have to accept that we have a more conservative approach than any other sport."