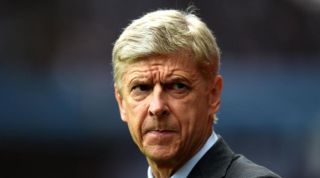 Alexis Sanchez grabbed both goals, capitalising on poor errors from Wes Brown and Vito Mannone, as the visitors left the Stadium of Light with three points.

The Chilean's second, which came in injury time, eased the tension for Wenger after Arsenal's impressive display had failed to glean fair reward.

Victory was just Arsenal's third of their Premier League campaign, but Wenger was satisfied with what was on show from his players.

He said: "We wanted the three points and got them. We were quite in control and were focused.

"We missed some opportunities but, overall, I am very happy. Sunderland was focused to defend very well."

Alexis has gone some way to repaying his £35million fee with eight goals from his last 11 appearances for Arsenal, and Wenger reserved special praise for the former Barcelona man.

He added: "Alexis took advantage of the mistakes they made.

"He has superb quality and speed; that's why he wins so many balls. He has shown his quality since he arrived here and he showed that again."