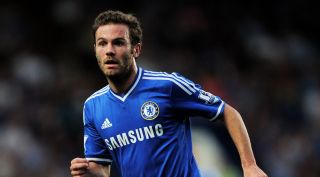 Mata, 25, has been the subject of speculation throughout the transfer window, with rumours suggesting that he could move to Manchester United as part of a deal to take Wayne Rooney to Stamford Bridge.

Anzhi Makhachkala playmaker Willian is expected to complete a move to Chelsea in the coming days, increasing the competition for places under manager Jose Mourinho - who is in his second spell at the club.

Spain international Mata was an unused substitute in Chelsea's 0-0 draw with United at Old Trafford on Monday, and has made just one appearance in the club's first three games.

Mata's agent – who is also his father - was reportedly at the Emirates Stadium on Tuesday as a guest of Arsenal, who cruised into the group stage of the UEFA Champions League with a 5-0 aggregate win over Fenerbahce.

That development has fuelled speculation that Mata could make the switch to Arsenal, but Wenger does not believe Mourinho - who has previously stated that the former Valencia man is not for sale - would allow Mata to sign for a Premier League rival.

"I watched the game last night (Monday) and I've heard, like you, Juan Mata could be on the market.

"There is anyway in England a reluctance to sell to each other."