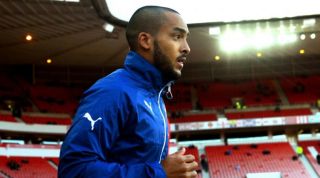 The England international sustained a torn cruciate ligament in an FA Cup tie with Tottenham last January, missing the latter half of the 2013-14 season and the World Cup as a result.

Walcott has made two substitute appearances this term, against Burnley and Swansea in November, and returned to the bench at Liverpool at the weekend after suffering a minor groin injury.

Wenger confirmed that Walcott is "not far" from making his XI over the busy festive period, and the Frenchman is confident his attacker will not miss a step when he does return.

"He has been missed because first of all he's a top quality player," Wenger said.

"He's a team player as well when he got injured he was in top form too."

When asked if Walcott would return to top form, Wenger added: "I think so because Theo was born 1989, 25 years old it's the best age now for a player of his quality.

"He's as quick as he was believe me, I see it in training."

With his attacking options returning to fitness, Wenger has conceded he may be forced into the transfer market in January to bolster his defence.

Arsenal have played the first half of the season with just six senior defenders in their squad, resulting in full-backs Nacho Monreal and Mathieu Debuchy featuring in previously untested central roles.

Highly rated Ipswich Town defender Tyrone Mings has been heavily linked with a move to the Emirates Stadium, but Wenger brushed off questions regarding the 21-year-old, signed from Chippenham Town for £10,000 in January 2013.

Wenger said: "The intensity of the link is not down to us."