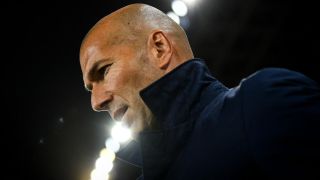 Sergio Ramos said he is not a fan of changes as the Real Madrid captain leapt to the defence of head coach Zinedine Zidane after the club's season went from bad to worse on Wednesday.

Madrid's campaign hit a new low midweek, sensationally upstaged by Leganes 2-1 at the Santiago Bernabeu and 2-2 on away goals in the Copa del Rey quarter-finals.

The result heaped further misery on Zidane, who is facing an uncertain future with Madrid 19 points adrift of runaway leaders and rivals Barcelona in LaLiga.

"I'm not a big fan of changes," Ramos said post-match.

"We are the first ones to stand up for Zidane."

Leganes became the first team in Copa history to knock out Spanish and European champions Madrid at the Bernabeu after losing at home in the first leg.

Madrid are still alive in the Champions League, preparing for a last-16 tie against French giants Paris Saint-Germain.

"To fall in the Copa del Rey is a failure," Spain international centre-back Ramos added.

"These are tough times, but we must be as united as possible and not throw the rest of the season away.

"You have to learn from bad moments. We are all responsible and we hope that this serves some use in the future. We still have the Champions League."