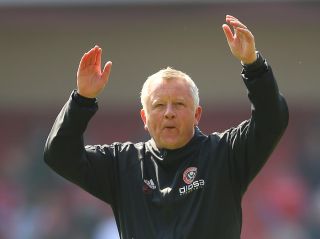 Sheffield United manager Chris Wilder praised his players for battling past 10-man Nottingham Forest and then fired a warning to their automatic promotion rivals.

Second-half goals from Mark Duffy and Enda Stevens earned the Blades a 2-0 win after Forest had had Yohan Benalouane sent off soon after the break.

Wilder said: “It was never going to be easy. We had to work hard to get in front and it was a little bit easier when they went down to 10 men.

“They sat in and made it difficult. It was a great first goal and the second one calmed everyone right down. I thought we saw the game out well.

“It was good to get back to winning ways against a powerful football club.

“These players have got a bit about them. We have to be positive in our approach.

“We’ve had a good run at it. It’s a great effort from everyone and I don’t think we’re done yet. I’m looking at one game at a time and we’ve just got to keep going.

“Every game is tight and we’ve got something to play for.”

After a first half short of scoring opportunities, Forest suffered a setback two minutes into the second when Benalouane was shown a straight red card for bringing down David McGoldrick just outside the area as the striker threatened to burst through.

Duffy opened the scoring in the 51st minute with a fine curling effort into the far corner from the left side of the area.

Wilder paid tribute to McGoldrick, saying: “He’s been a calming influence in the group this week. He’s been really good on the training ground after losing Chris Basham, John Egan and Billy Sharp.”

Forest boss Martin O’Neill felt his side had a decent claim for a first-half penalty after Jack Colback went down, the midfielder instead receiving a yellow card for a dive.

“I think it could have gone either way,” O’Neill said. “If a penalty had been given, I don’t think anyone could have complained.”

O’Neill also felt his side were hard done by over the sending-off, saying: “I think that’s pretty harsh. First and foremost, Benalouane says he didn’t touch him. There is an angle that might even suggest that. Take that aside, I think (Molla) Wague is providing cover so it doesn’t look as if he’s the last man.

“The sending-off has changed the game and Sheffield United scored just a couple of minutes later and eased the anxiety around the stadium.

“We were still even in the game with 10 men and there were a few anxious moments for Sheffield United. The big turning point was the sending-off.

“It’s important for us to stop the run of defeats. It’s a tough old job but I think I came in with my eyes open.”