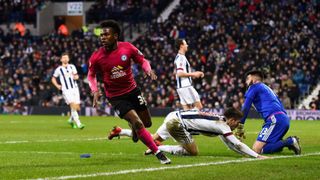 Saido Berahino shrugged off speculation about his future by giving West Brom the lead with a brilliant strike after just 14 minutes at The Hawthorns, beating Jak Alnwick with a clipped shot from outside the penalty area.

The Premier League outfit had only won one of their last five matches in all competitions and Peterborough deservedly equalised through Shaquile Coulthirst with 11 minutes to go after some slack defending.

Berahino put West Brom back in the lead with another fine strike on 84 minutes but substitute Jon Taylor hit back with a volley a minute later to set up a replay.

West Brom had won their last 11 FA Cup home matches against lower league opposition but the Premier League outfit could not extend that run to 12 victories.

Tony Pulis handed a rare start to striker Berahino, who had a short loan spell at Peterborough in 2012, with Jonny Evans acting as captain due to Darren Fletcher's knee injury.

James McClean created an opening for Lambert in the first minute, but the striker's first touch let him down.

West Brom took the lead after 14 minutes, with Berahino on target. The striker had scored six goals and supplied four assists in his previous five FA Cup matches and added to that impressive record with a fine finish from Lambert's pass after Craig Gardner had smartly won the ball in midfield.

Coulthirst went close to scoring an equaliser after 21 minutes, shooting narrowly wide after good work from diminutive playmaker Erhun Oztumer, before a speculative long-range effort from Sebastien Pocognoli flew well over the crossbar.

Alnwick then kept his side in the game on 34 minutes when Ricardo Santos gave the ball away and McClean pounced, but his shot was straight at the Peterborough goalkeeper.

Lambert had a glorious chance to double the lead two minutes into the second term, but he scooped his shot into Alnwick's arms from close range after Stephane Sessegnon opened the visitors up.

A burst ball then provided a chance for Graham Westley to show off his acting talent, the Peterborough manager dramatically falling to the ground as the ball popped.

Westley had made a double change at half-time with Taylor and Martin Samuelsen introduced for Lawrie Wilson and Harry Beautyman but his side, seeking to reach the fifth round for the first time since 1986, lacked cutting edge in the final third.

Gardner could have secured the result for West Brom but he shot well off target on 70 minutes after Berahino had combined with Salomon Rondon.

Michael Smith and substitute Marcus Maddison both shot straight at Boaz Myhill as Peterborough threatened and the League One side deservedly forced an equaliser on 79 minutes.

A defensive mix-up let in Coulthirst and he made no mistake in front of the visiting supporters, but Berahino struck again with six minutes to go, smashing in another terrific finish to put his side back in front.

Peterborough equalised within a minute, Taylor sensationally volleying home from Santos' pass to earn his team a replay at London Road.