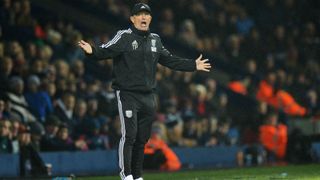 Tony Pulis has vowed to adopt an attacking philosophy in order to help West Brom avoid a slip-up in the FA Cup third round against Bristol City.

West Brom welcome the Championship strugglers to The Hawthorns seeking a third straight win having pulled away from the Premier League relegation zone with victories over Newcastle United and Stoke City.

Despite their recent upturn in form, West Brom have been far from prolific in front goal.

Only three teams have scored fewer than West Brom in the Premier League this season and Pulis is keen for his side to improve in the final third against City.

Pulis - who managed Saturday's opponents from July 1999 to January 2000 - said: "We'll certainly be putting out a team that is very attack-minded.

"The most important thing is to make a statement to the players and to make them aware that we want to go out and win this game.

"We don't want a replay and we don't want anything else going on. What we have to do is get out there and play in a very positive manner.

"We need to play in a manner that gives us the opportunity to create and score goals.

"If we play like we have in the last couple of games and go about our business in the right way, then it could be a high-scoring game.

"I've been to a cup final [with Stoke] and I know what it can do for a club. The importance of a good cup run for any club is enormous. It's a great ride, a great occasion and it would be great to do it again."

West Brom are likely to be without Jonas Olsson and Victor Anichebe because of hamstring injuries picked up in the win against Newcastle.

Even with those absences, West Brom will be expected to ease into the next round versus a team that is third bottom of the Championship with 21 points from 25 games.

A last-gasp Nick Blackman goal saw City lose 1-0 at Reading last time out and midfielder Marlon Pack told their official website: "We can't cry about it, we have to get on with it.

"We've got the cup game coming up now and perhaps it'll be a nice break from the league for us. There will be less pressure on us and we can go out there and play. It's a chance to evaluate things."