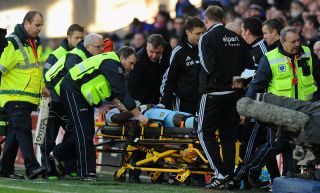 The Ivorian was knocked unconscious after a sickening clash with team-mate Roger Johnson in a 2-0 win at the Cardiff City Stadium earlier this month and required nine minutes of treatment on the pitch.

He was subsequently taken to hospital, where he stayed overnight, before he was finally given the all-clear the following day.

Demel has not yet returned to training, with the club's medical staff monitoring him closely before allowing him to take part with the rest of the first-team squad, and admits he has little recollection of the incident.

"I don't remember anything about it," he told the club's official website.

"It was hard to look at the video, but I saw some pictures so I know what happened, but I cannot remember anything for 48 hours before the incident happened. I don't remember travelling to Cardiff or the match or anything.

"The first thing I can remember is waking up in hospital and they asked me where I was and I didn't know. I knew I was in hospital but I thought I was in London because my last memory was of being at home.

"Nothing like this had ever happened to me before. I was very confused for a couple of days after it happened but now I'm feeling better.

"It is really hard when you cannot remember things, even if it was only for two days.

"I had a headache, so it was hard for a few days after, but now I'm feeling better."