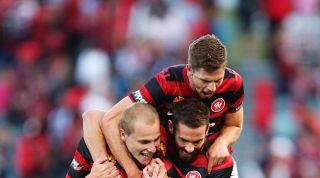 After a poor run which included three losses in their last four games, the Wanderers returned to their devastating best against the Glory to move back into second spot on the A-League ladder.

First half goals to Brendan Santalab and Aaron Mooy had the home side cruising at the break before Shane Smeltz pulled one back early in the second half.

But Mark Bridge put the result beyond doubt when he scored from the penalty spot 19 minutes from time to send most of the crowd of more than 14,000 fans home happy.

The Wanderers produced some sublime football, especially in the first half with Japanese playmaker Shinji Ono at the heart of the most of it.

It would have been an even bigger win for Tony Popovic's men if not for the performance of Glory shot-stopper Danny Vukovic, who pulled off half a dozen brilliant saves throughout the match.

The Wanderers struck twice in a totally dominant first half, the opener a superb counter-attack while the second had a tinge of good fortune about it.

Despite controlling proceedings from the outset it took until the 28th minute for the home side to get their reward through Santalab.

Matthew Spiranovic, who shifted into midfield for the first time this season, won possession in the middle of the park before surging forward and releasing Mark Bridge down the left.

Bridge's first time cross was perfect for Santalab who had the simple task of tapping home from close range with Vukovic stranded.

The goal was just what the Wanderers deserved and seven minutes later they doubled their lead through Mooy.

The off-contract midfielder unleashed a free-kick from 25 metres out, which took a wicked deflection off the wall that totally wrong-footed Vukovic.

The Wanderers found it hard to reproduce the same intensity after the break and as a result the visitors gave themselves a lifeline 10 minutes into the second half.

A sloppy giveaway from Mooy at a free-kick allowed Chris Harold free down the right and the lightning quick winger got his delivery right for Smeltz to pounce.

Any nerves the Wanderers may have had disappeared 20 minutes from time when Shannon Cole was brought down in the box by a clumsy challenge from Riley Woodcock.

Bridge converted from the spot to restore the Wanderers' two-goal buffer and sniff out any hope of a Glory fightback.