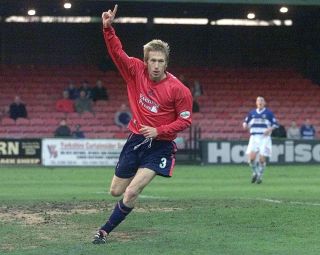 Brighton have appointed Graham Potter as their new manager.

The 43-year-old replaces Chris Hughton, who was sacked at the end of the season.

Where did Potter spend his playing career?

Potter came through the ranks at Birmingham and made his first-team debut in the 1992/93 season, clocking up 23 appearances in the old second division.
He was loaned to Wycombe before joining Stoke, and later Southampton for £250,000 in 1996. Potter soon dropped back into the second tier to join West Brom and wound down his career with York, Boston, Shrewsbury and Macclesfield. The full-back won one England Under-21 cap in a 2-0 win over Moldova in 1996.

What was his route into management?

Potter hung up his boots in 2005, aged 30, after 64 appearances for Macclesfield, and went on to graduate from the Open University with a degree in social sciences, before completing a master’s. He worked at the University of Hull and Leeds Metropolitan as football development manager, and coached in York’s youth set-up. In December 2010 Potter signed a three-year contract as coach at Ostersund, then in the fourth tier of Swedish football.

How did he do?

Pretty well, to put it midly. In his first two seasons in charge Potter guided Ostersund to back-to-back promotions as champions. In 2015 Ostersund were promoted to the top flight for the first time in their history, and two years later they won the Swedish Cup to qualify for the Europa League. After finishing second in the group stages they stunned Arsenal 2-1 at the Emirates Stadium but were knocked out on aggregate.

When did he join Swansea?

Potter left Ostersund in June last year with the club in sixth place in the top flight to take charge at the Liberty Stadium. He has won many admirers in south Wales after guiding Swansea to a 10th-placed finish in the Championship, and the club were desperate to keep him.

What can Brighton expect?

The former defender is seen as a progressive, innovative coach who can take Brighton forward, after the team went rather stale towards the end of Hughton’s reign. Tactically flexible, Potter has been known to use two or three formations during one match and preaches a possession-based style. His unconventional methods off the pitch in Sweden included getting his players to put on concerts for the local community.