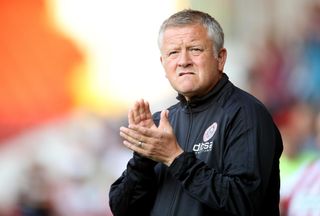 Sheffield United boss Chris Wilder has dismissed suggestions his side have been too defensive since winning promotion to the Premier League.

An ultra-expansive brand of football saw the Blades come up from the Championship but Wilder has adapted the way his team approach matches in the top flight.

United have still caught the eye with their play but goals have been a problem so far this season, with only bottom club Watford, Everton and Newcastle scoring fewer heading into Saturday’s fixtures.

The goalless draw at Watford prior to the international break prompted some to encourage Wilder to revert back to his all-out attacking style when they host Arsenal on Monday, but the Blades boss insists it would be folly to ignore the threat posed by Unai Emery’s side.

“It’s not about taking the shackles off, I don’t agree with that or the way it’s put,” said Wilder.

“I think we have gone for games – when we can. Against Liverpool, do we go bombing forward against one of the best counter-attacking teams in the world? I don’t think so.

“Watford played eight at the back – and that is us at Watford who are an established team at this level with some excellent players.

“We were able to go for it a bit more in the Championship, but this is a different level. Every point we earn is precious.

“We’ve gone after every team we have played so far when we have been able to pick our times – even against Liverpool.

“We are competitive and we fancy our chances and we will do the same against Arsenal, while at the same time understanding the threat and pace and power that Arsenal have in the top end of the pitch.

“We want to get something from the game this time, having lost against Liverpool, and we believe we can do that. But we have to do it in the right way.”

Wilder is waiting on the fitness of John Fleck, David McGoldrick and record signing Oli McBurnie before deciding his starting line-up against Arsenal.

Despite concerns about their availability, and the Blades’ returns in front of goal, Wilder is not planning many changes to the team that got a point at Watford.

However, he has indicated there could be a reshuffle up front to try and exploit any weaknesses in the Gunners’ defence.

“I believe in consistency and there has been continuity, that has helped us,” said Wilder. “At the top of the pitch, I’m not so sure if it’s about finding the right partnership, it’s about those individual moments and the opposition.”