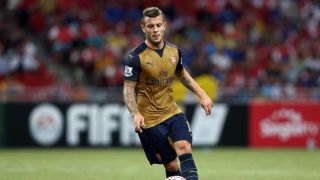 Jack Wilshere is expected to be out of action until mid-March, as his lengthy recovery from a fractured fibula continues to drag on.

Arsenal manager Arsene Wenger had previously stated his optimism that his central midfielder would return to fitness by the end of February.

However, the French manager has now confirmed the England international is still a while off returning to the first-team, with his hopes of a Euro 2016 squad place beginning to dwindle.

"Jack is starting to run," Wenger told reporters. "Once you move out, from the first day, you count six weeks to be competitive and build up stamina and intensity. You need six weeks to be ready fitness-wise."

Wilshere has not made a single appearance for Arsenal all season after suffering an injury in training on the eve of this season’s Community Shield.

The 24-year-old continues to be plagued by injuries and has seen his recuperation set back following surgery in mid-September.