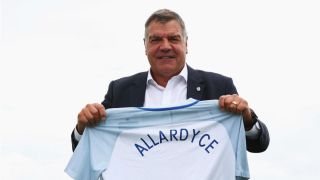 Sam Allardyce outlined his plans and ambitions on his first day as England manager on Monday, as well as highlighting how he plans to succeed in the role.

Facing the press for the first time since replacing Roy Hodgson in the aftermath of the Three Lions' below-par performances at Euro 2016, the former Sunderland manager spoke confidently about his ability to excel in a position that many have struggled in over the years.

THE PREMIER LEAGUE'S IMPACT ON ENGLAND

"No mid-season break for one, I've been an advocate of that for 10 seasons or more.

"The demands physically and mentally on players is enormous and it's the best league in the world and biggest brand.

"The demand has to be on the players for that but it would help the Premier League and us at international level if we could try and achieve that [mid-season break].

"In my time when we finished the Christmas period, January and February were always the most difficult to get the players through."

"I expect the players to be very adaptable and very flexible. I don't expect a player at this level to be only able to play only one position and one style. It may be the same system [as at youth level] but with a tweak here or there.

"We worked on Jermain Defoe [at Sunderland} as a player that supposedly cannot play up front on his own.

"We worked on that and what did he do? He played up front on his own all season and scored 15 Premier League goals, no matter what people tell me it doesn't stop me from trying something or trying an opportunity."

"It is not potential anymore, it has to be reality and they have to stand up and be counted.

"The young players have a lot of experience now and even though some of it has been bitter, they don’t want to feel like that again. Potential is not something I want to use, you want the quality player to produce his best performances immediately.

"This squad of players is very experienced and going forward hopefully produce better."

"It's two years away and the most important thing to do now is to be very good at qualifying and once we've qualified then we can go to in-depth levels about challenging ourselves to produce better results in tournaments.

"It's at a later stage. At this moment it's about players coming and continuing to do what we've done well. We all had great hopes for the Euros because of qualifying, I hope the lads can continue where they left off from that point.

HIS ABILITY TO HANDLE TOP STARS

"The good thing about talented players is they make your life easier, they know what you want and they take less time to prepare so working with England's elite is going to be exciting. They'll take on board what we want very quickly because they're the best in the country."