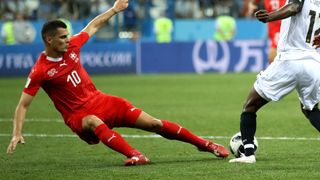 Granit Xhaka has pledged to rise above Sweden's pre-match provocations as Switzerland aim to reach their first World Cup quarter-final since 1954.

The Arsenal midfielder has found himself to be a focus of pre-match attention after Sweden defender Mikael Lustig explicitly stated his team-mates will try to play upon the temperament of a player booked 10 times in the Premier League last season.

"If you watch the Premier League you can see he tends to get red cards. It's just about keeping your head and trying to get him sent off," Celtic right-back Lustig told reporters.

Asked to respond at a pre-match news conference in St Petersburg on Monday, Xhaka put forward a studied response.

"Well, this is not my first match, you know," he said. "Of course, I understand, my friends have been telling me about what the player said

"It's no problem for me. It's just about pre-match provocations, no problem at all.

"I think I've learned a quite few things in my playing career. I'm quite confident that I'll not be squeezed out of the game by them.

"Quite possibly I'll be staying all the way to the end on the pitch and this is my objective, of course."

A solidly entertaining section in that presser of "let's get a rise out of Granit Xhaka". Petkovic seemed to think the whole thing was mildly hilarious.July 2, 2018

Attempts to rile Xhaka seemingly took a more inflammatory turn during Sweden's open training session earlier on Monday when Pontus Jansson was photographed as he appeared to mock the double-headed eagle celebration.

Xhaka and Xherdan Shaqiri - both of whom are of Kosovar-Albanian descent - were fined by FIFA for making the gesture, which is a traditional symbol of the ethnic Albanian identity, when they scored during the emotionally charged 2-1 group-stage win over Serbia.

An enquiry about Jansson's actions was met by a glare from Xhaka before Switzerland's press officer moved the discussion onwards.

Since the Serbia game, an even greater focus has been placed upon the diverse range of immigrant backgrounds from which Switzerland's squad is drawn – something head coach Vladimir Petkovic believes makes his collective stronger.

"That's a nice question but it’s not realty referring to our sport, is it?" the Bosnian-born tactician replied when the matter was raised.

"We manage to bring together different cultures different talents and different ideologies and they help us a lot to play really good football.

"To have a team like ours where the chemistry is right, a team that really goes together, then it is a guarantee for success."

Any success on Tuesday will have to be achieved without influential captain Stephan Lichtsteiner, who is suspended along with centre-back Fabian Schar for collecting two group-stage bookings.

Another man with an Arsenal connection, Johan Djourou, is favourite to come in for Schar, while forward Breel Embolo is available having returned home after the 2-2 draw against Costa Rica for the birth of his daughter.