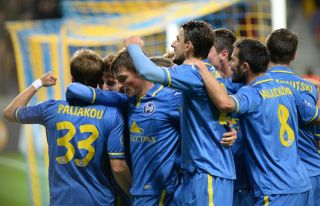 The Belarusian champions were trounced 6-0 at Porto on matchday one, but they recovered to kick-start their European campaign with a 2-1 win over Athletic Bilbao in Group H.

Playing in front of their passionate fans at the Borisov Arena, BATE controlled the first half and deservedly took a two-goal lead before the break courtesy of Denis Polyakov and Aleksandr Karnitski.

Aritz Aduriz pulled a goal back for the Spanish visitors on the stroke of half-time but BATE were not to be denied their first Champions League win since October 2012.

"We have only positive emotions. We are very happy with today's victory as we needed it very much," said Yermakovich.

"We wanted to make our supporters happy and make amends for that Porto loss. We had a bad record against Spanish teams, so we are also pleased to improve that.

"We prepare for each opponent very carefully. I chose the best starting XI for this match – only the best and strongest started the game.

"We hoped to shut down Athletic on the flanks as they are strong there and we managed that. We're thankful to our fans for their great support.

"When we're together with them, we're unbeatable."

BATE goalscorer Karnitski said his team-mates were spurred on by their horrendous showing against Porto last time out.

"It was a real battle. Both teams played an open game, nobody tried to close it – it was attack after attack," he said.

"We turned out to be stronger, so perhaps we wanted it more. I think we did it because of our crazy desire; we had fire in our eyes.

"We wanted to rehabilitate ourselves after the defeat by Porto. So the boys gave 100, even 120 percent."