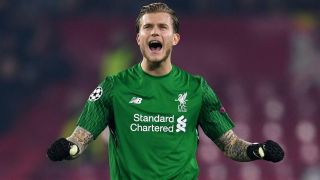 Jurgen Klopp is not about to go back on his decision to name Loris Karius as Liverpool's first-choice goalkeeper despite a mistake against Manchester City, but he has warned that the 24-year-old "has to deliver".

Klopp revealed after the 4-3 defeat of City that Karius – who started the game – was to be his first-choice goalkeeper for the foreseeable future.

That admission should have brought an end to the debate of which goalkeeper was to hold the position regularly for the remainder of the season, but further questions have been asked of Karius after being deemed culpable for Leroy Sane's goal against City.

Klopp insists he is not so quick to change his mind, however, adamant that he is to remain faithful to Karius so long as he performs, with a trip to Swansea City up next on Monday.

When it was put to Klopp that Simon Mignolet had been dropped in favour of Karius while he was performing well, Klopp said to reporters: "Do you really think that I change my mind that quick?

"First of all, it's the first time I heard anything positive about Simon Mignolet. I'm happy about that. I was always positive about him, so maybe you should tell him personally.

Klopp: "It's a very difficult job to be a goalkeeper or a centre-half at Liverpool because nobody forgives you a mistake. Loris has to deliver, he knows that, but I saw a lot of good things in the games he played."Watch live and free: January 19, 2018

"It's a very difficult job to be a goalkeeper or a centre-half at Liverpool because no one forgives you [after] one mistake. Obviously, since I'm here​,​ it feels like 'wow' if our goalkeeper makes a mistake and it's a disaster.

"If any other goalkeeper makes a mistake then he's still a fantastic goalkeeper and we should still buy him. I'm really fine with our goalkeeper situation.

"Loris Karius could have made a save around the first goal [against City], even though I think it was a world-class finish in this moment. It always makes sense to say the truth.

"He's a really good goalkeeper and we brought him in because we wanted him to play. There were a few difficulties, but he's settled as well. [There are] a lot of really good things in his game -- they are natural, I like them, and now he can show them.

"That's all. We changed a lot of positions during the year, but only with the goalkeeper it looks like [according to pundits] we have to stick to our opinion for 20 years if we made a decision one time. I changed not my opinion, but the situation. That's all.

"But of course, Loris has to deliver. He knows that. Now he is the No.1 and that means he can play again and he can concede a goal like he conceded against Manchester [City].

"It's not like we want that, but it's still possible. All the good things, I like to see again. I saw a lot of good things in the games he played in the last few weeks. That's why he's in."